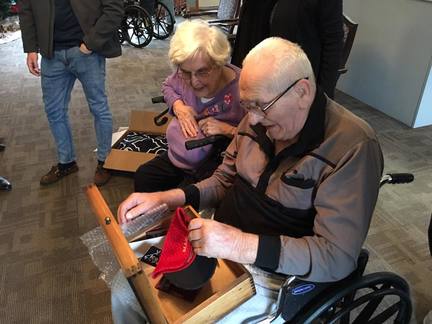 George Rudolph "Rudy" Clay wiith his wife Lois
Perryopolis, PA, December 22, 2016: George Rudolph “Rudy” Clay was presented with a Memorial Box featuring several Marine Corps items to recognize his service to the United States of America during WW II by the Morgantown Elks Lodge #411 as part of their Adopt-a-Veteran Program. Rudy was part of the Marine Corps invasion force that stormed and eventually captured the island of Iwo Jima in February 1945. In fact, Rudy saw the iconic moment through binoculars when the United States flag was raised on Mount Suribachi. Morgantown Elks Lodge members Stanley Maciasz (and his wife Shirley) and John Penn were present at the special presentation, which was attended by Mr. Clay, his wife Lois, and a large number of family members including children and grandchildren and their families.
Included in the Memorial Box, adorned with the Marine Corps colors were several items of highly sentimental value. These items included a Marine Corps ball cap, a bumper sticker with the slogan “There Are No Ex-Marines”, two (2) commemorative medallions featuring the flag raising on Mount Suribachi on February 23, 1945 and a coin featuring the Marine Corps founding. Rudy's wife, Lois Clay, was also presented with a gift from the Elks Club; i.e., a beautiful blanket, which she plans to use as a bed cover.
Mr. Clay initially enlisted in the Navy in March 1944, just short of his graduation from high school. As fate would have it, he also received his draft notice on the same day that he enlisted. After a long train trip to Pittsburgh to respond to the draft notice, a strange quirk of fate had the Marine Corps recruiter win the battle for Rudy’s service. Mr. Clay joined the Marine Corps instead. After boot camp, Corporal Rudy Clay was deployed with the Fourth Marine Division and was part of the force that was island jumping their way to Japan. On February 19, 1945, Rudy’s group was in the third wave that landed onto the unexpectedly soft loose beach at Iwo Jima where the soldiers sank up to their ankles in the sand as they tried to move and the Jeeps sank up to their hubcaps. On February 23, 1945 from their foxhole, Rudy’s buddy, Joe, saw the exact moment that the U.S. flag being raised on Mount Suribachi on Iwo Jima by the five U.S. Marines, and a Navy corpsman, a moment that has since been immortalized by Pulitzer Prize winning photographer Joe Rosenthal. Rudy’s friend, Joe, pointed out to Rudy that the flag was being raised and Rudy peered through the binoculars and saw the flag flying loftily in the breeze. Rudy and Joe thought that the flag flying on Mount Suribachi meant that the island was secure. Unfortunately, it took another 32 days for the island to be truly secure on March 26, 1945. About a week after the flag was raised, still in action on Iwo Jima, Mr. Clay’s foxhole was hit with an artillery shell, killing Joe instantly and severely wounding Rudy, thus ending his participation in the war.
The award presentation was part of the Morgantown Elks Lodge Adopt-a-Veteran Program, recognizing the actions of veterans of all ages and all areas of combat. The Elks live by the statement “As long as there are veterans, the Elks will never forget them.”.
ADDITIONAL IMAGES 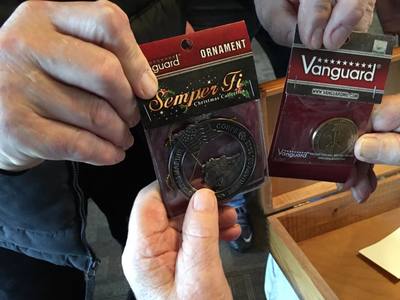 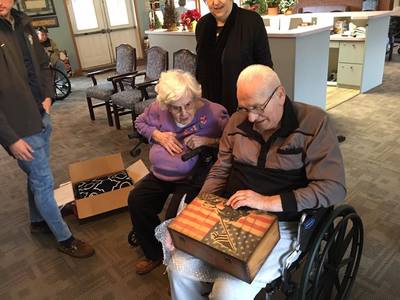 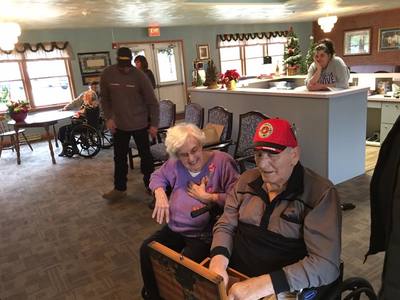 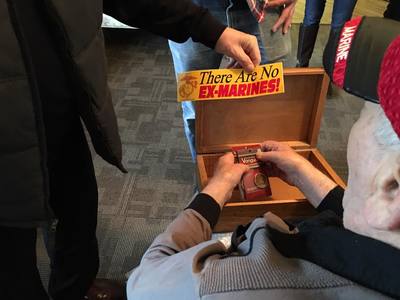 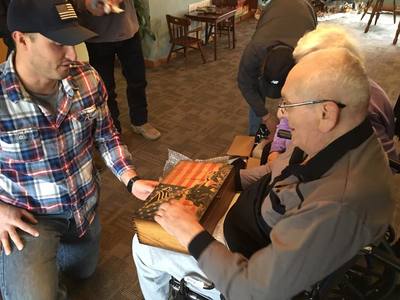